Get started for free
Back
VW

The Price Sensitivity Meter (PSM) helps determine the psychologically acceptable range of prices for a single product or service. It is a frequently used pricing research method proposed by the economist Peter van Westendorp in the 1970s. It is particularly useful when:

Using Van Westendorp to check if pricing is too high for the target market.

Each respondent is asked four questions on the price perception in Van Westendorp survey.

Van Westendorp surveys can be automatically translated to more than 30 languages.

For example, this chart suggests that the acceptable range of prices is $5 to $10, with the so-called "optimal" price of $6.75.

Conjointly also provides Newton, Miller and Smith’s extension, which charts an approximated price elasticity of demand curve. The steeper the demand curve, the more price-sensitive customers are in relation to this product. 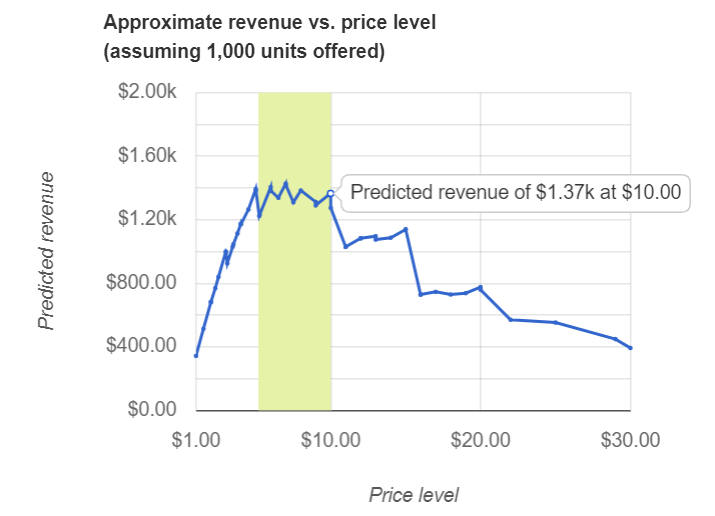 For example, this chart below suggests that the revenue-maximising price is around $10.

In this methodology, Conjointly will ask each respondent four questions on the perception of price, by asking at what prices respondents would consider the product:

The main output of the method is a chart of four intersecting lines. Each of these lines shows cumulative frequency for each of the four price levels across the respondents. The intersections of the four lines have the following interpretations:

Even though the lines in the Price Sensitivity Meter chart look similar to elasticity curves, they are merely cumulative frequencies of responses, and do not show the amount of demand for any given price point. Newton, Miller and Smith proposed an extension to the PSM model, which helps address this issue.

This extension adds two 5-point scale questions that follow the Van Westendorp questions, asking about purchase likelihood at the prices the respondent has identified as “cheap” and “expensive”. This data allows us to construct (very approximate) elasticity curves and revenue charts.

Check out the free Van Westendorp Excel Template to learn more. Or schedule a consultation with one of our experts to discuss your pricing projects!

Setting up on Conjointly

There are a few things you will need to specify in Conjointly for this type of experiment:

In Conjointly, Van Westendorp questions are available both as:

You can add as many PSM exercises in a single experiment as you like.

The PSM is a great method to get exploratory results on the acceptable range of prices. It reveals attitudes people have about price points and where those attitudes might create hurdles that your company might have to overcome.

Because PSM is a “direct” pricing technique (where we ask respondents directly to name various prices), it is not appropriate in some situations, such as:

PSM is often criticised as lacking solid theoretical foundation and history of predictive success (which is not the case for conjoint analysis, a more robust and proven method). In particular, we encourage you to consider the following:

There is, at times, confusion regarding the charting of PSM plots, which stems from an original paper by Peter van Westendorp (see Figure 5: NSS Price-sensitivity Measurement Electric Razors) , in which the author proposed to:

Underneath the right-hand-side version of the plot, the following commentary was given:

However, this commentary is incorrect because:

The effect of the inversions is to make the acceptable price range wider, diminishing its usefulness in practical applications. Needless to say, the inversions confuse an already complicated chart and make interpretation of the intersections murkier. Conjointly therefore follows the more commonly accepted approach in the market research industry of using non-inverted cumulative frequencies lines. If you still have any questions about the interpretation and the use of correct lines, we will be happy to discuss your research with you.

Efficiently test up to 300 product claims on customer appeal, fit with brand, and diagnostic questions of your choice.

Identify winning product variants from up to 300 different ideas (e.g., designs, materials, bundle options) on customer appeal, fit with brand, and diagnostic questions of your choice.

Test 2,3, or 4-way combinations of up to 100 claims for categories where products show several claims at once.

MaxDiff (aka Maximum Difference Scaling or Best–Worst Scaling) is a statistical technique that creates a robust ranking of different items, such as product features.

Efficiently test packages to identify the best one for your product

Conduct automated TURF analysis on results of any Conjointly experiment (or an outside dataset) using this user-friendly TURF analysis tool.