Get started for free
Back
MD

MaxDiff (also known as Maximum Difference Scaling or Best–Worst Scaling) is a statistical technique that creates a robust ranking of different items, such as product features. MaxDiff is an alternative to conjoint analysis from which the respondent has to indicate which feature is most important or most desirable, and which is least important or desirable. Conjointly’s novel robust approach to MaxDiff allows for:

Traditionally, MaxDiff treats each product as an individual item, whilst conjoint treats products as a combination of attributes and levels. As such, the conjoint analysis produces rankings for particular products by summing the preference scores for each attribute level of a product, whilst MaxDiff produces rankings by polling the respondents directly.

Using MaxDiff surveys to determine which colours are the most popular for the customers.

MaxDiff surveys ask the respondents directly about each product as an individual item.

MaxDiff questions can be automatically translated to more than 30 languages.

Each level of each attribute is scored for its performance in customers’ decision-making. In our example, navy is the most favourable colour and is displayed as positive. Yellow is the least preferred colour and therefore displayed as negative. It's important to remember that the performance score of each attribute is relative to the other levels shown to respondents. For instance, the colour red will only be shown as negative when compared against a specific set of colours (levels) — testing red against a different range of colours could yield a positive result. 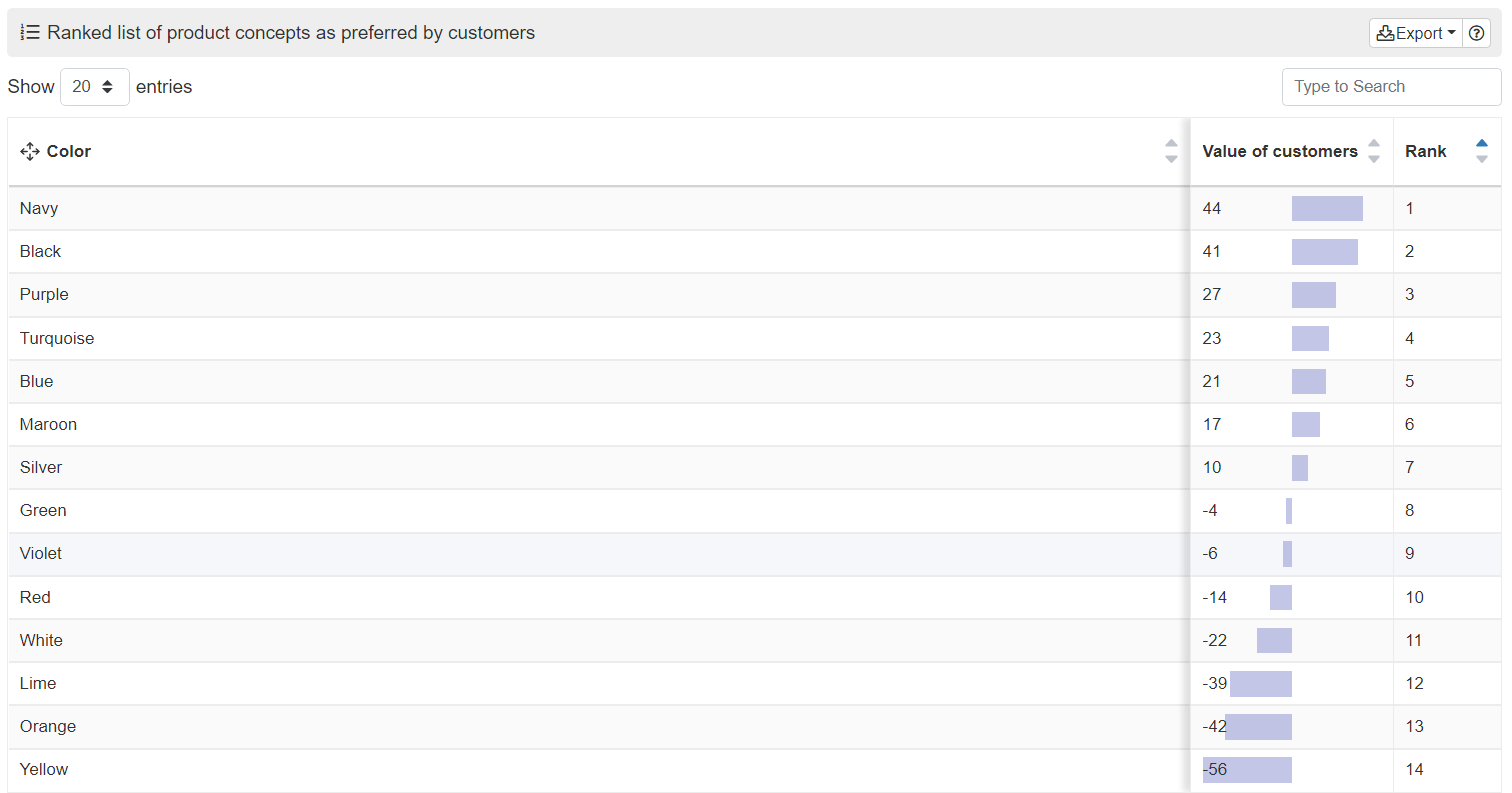 List all possible level combinations and rank them by customers' preferences.

Conjointly forms the complete list of product constructs using all possible combinations of levels. They are then ranked based on the relative performance of the levels combined. This module allows you to find the best product construct that your customers will prefer over others.

Segmentation of the market

Find out how preferences differ between segments.

With Conjointly, you can split your reports into various segments using the information our system collects: respondents' answers to additional questions (for example, multiple-choice), simulation findings, or GET variables. For each segment, we provide the same detailed analytics as described above.

TURF analysis aims to find the combination of items that appeals to the largest proportion of consumers. Conjointly makes conducting TURF analysis easy by letting you export your MaxDiff data directly into Conjointly's TURF Analysis Simulator with a single click. 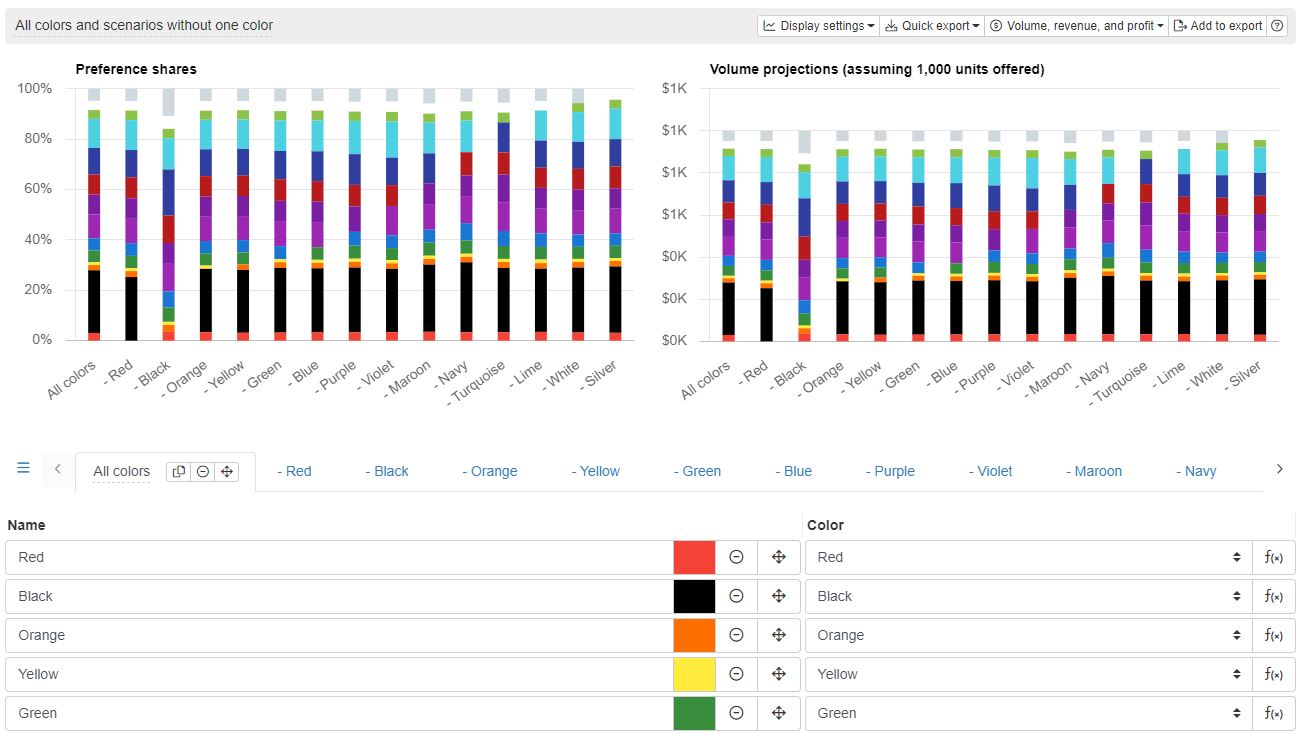 View simulations of preference shares for your product with the Preference Share Simulator.

With Conjointly, you can simulate shares of preference and volume projections for different product offerings, including those that are available in the market. Learn more about using the simulator for MaxDiff.

For each MaxDiff question, Conjointly asks respondents to select the best and worst options from a random selection of options. Each respondent is asked to complete 12-16 of these questions.

For example, let’s say we performed a MaxDiff survey on soda flavours:

Cola was presented to respondents in 100 trials. It was selected as the best option 76 times and the worst option 6 times. Then to calculate the outputs:

With Conjointly, you can perform a MaxDiff survey on flavour, pack size, format, and any other attribute you may be looking to test in the same experiment. The preference scores and percentage chosen outputs are presented separately for each attribute.

Setting up on Conjointly

Conjointly also allows you to present respondents with additional questions.

Only one MaxDiff block may be presented to respondents, but any number of additional questions may be added.

Differences between MaxDiff and Conjoint Analysis

Both techniques are similar in presenting respondents with a set of options and asking them to choose, which is a method based on consumer trade-off decisions that realistically mimic decisions respondents would make in real life. However, there are some core differences in approach and usage between MaxDiff and Conjoint experiments:

What is the benefit of performing TURF Analysis on the results of a MaxDiff experiment?

TURF Analysis is a natural extension of MaxDiff, as it allows you to identify which combination of attributes will "reach" the most amount of consumers, where reach is defined as the percentage of respondents for whom at least one of the attributes in a particular combination is their most preferred.

When considering launching multiple products/features, the powerful TURF Analysis Simulator lets you use the results of your MaxDiff experiment to identify the combination of items that appeals to the largest proportion of consumers with a single click!

Can I use MaxDiff in combination with Van Westendorp analysis?

Yes, by combining both MaxDiff and Van Westendorp, you are able to create a Feature Placement Matrix that allows you to classify features by both importance and willingness to pay.

How do I make brand-specific combinations of attributes?

To create brand-specific combinations of attributes, first, create a Brand-Specific Conjoint and assign each attribute being tested to the appropriate brand. After the experiment is saved, it can be converted to MaxDiff under Advanced Survey Options.

MaxDiff (aka Maximum Difference Scaling or Best–Worst Scaling) is a statistical technique that creates a robust ranking of different items, such as product features.

Efficiently test up to 300 product claims on customer appeal, fit with brand, and diagnostic questions of your choice.

Identify winning product variants from up to 300 different ideas (e.g., designs, materials, bundle options) on customer appeal, fit with brand, and diagnostic questions of your choice.

Test the effectiveness of your digital advertisements in an online environment

Validate your product descriptions before release

Efficiently test packages to identify the best one for your product

Conduct automated TURF analysis on results of any Conjointly experiment (or an outside dataset) using this user-friendly TURF analysis tool.

Allowing advanced choice modellers to upload their own experimental designs and perform data collection on Conjointly.