Get started for free
Back
KANO

Classify features by attractiveness to users

As part of the Feature and Pricing Suite for SaaS, the Kano Model is a time-tested tool that helps you differentiate potential features according to users' needs. Developed in 1984 by Professor Noriaki Kano, the Kano Model is used for: 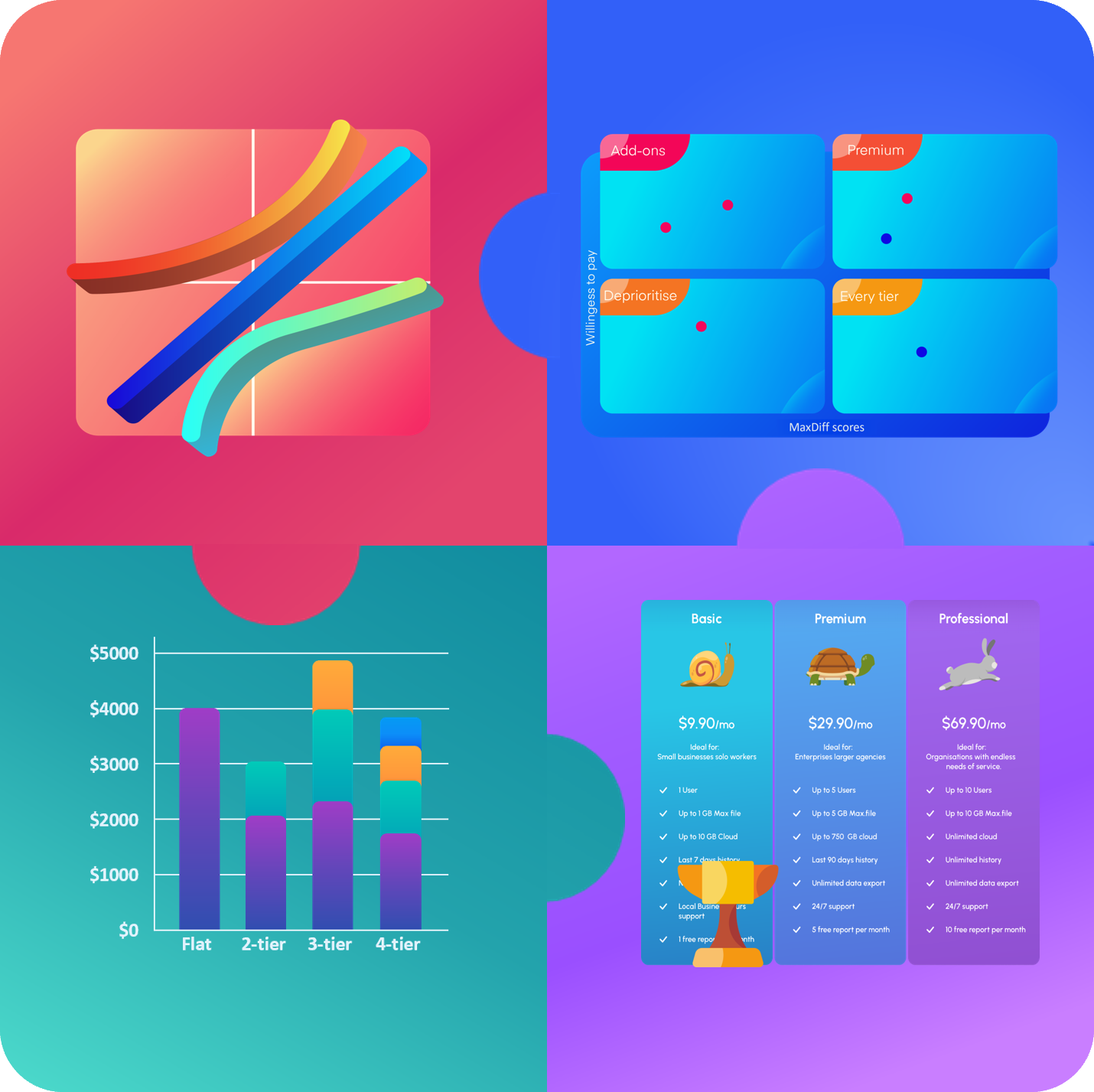 What is the Kano Model?

Through analysing every respondent's feelings toward the inclusion and exclusion of each feature, the features are categorised to represent the largest proportion of respondents.

In this example, data history is assigned as a must-be feature, as the category reflects 43% of respondents. 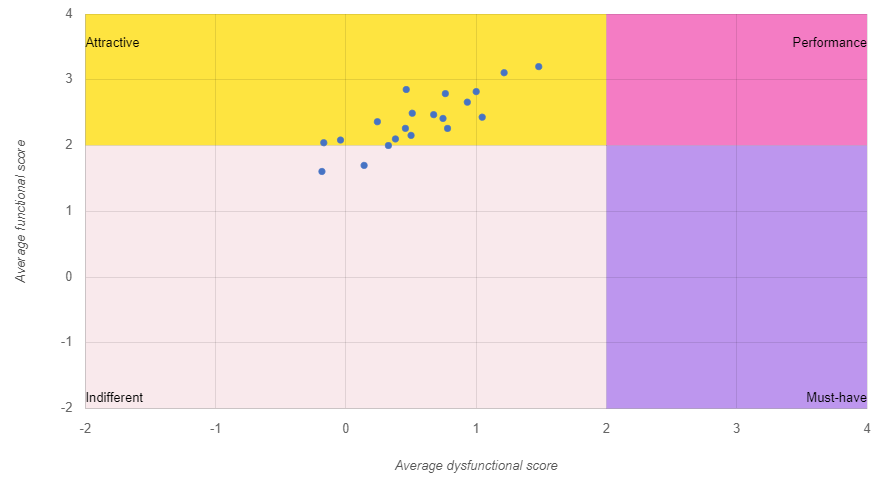 Understand the categorisation of software features at a glance

The Feature Categorisation Matrix averages the respondents' functional and dysfunctional scores to allow you to compare features across four quadrants - must-be, performance, attractive, and indifferent.

The example shows that out of the 12 features investigated, four features (i.e., Feature 5: Online support, Feature 10: Free tutorials and guides, Feature 6: All OS compatible, and Feature 2: Cloud storage) are considered must-be features and should be included in all offerings.

The Kano Model helps you achieve product-market fit by classifying your software features according to their attractiveness to users. The following table summarises Conjoint.ly's recommendations to assist you in perfecting your software offering: 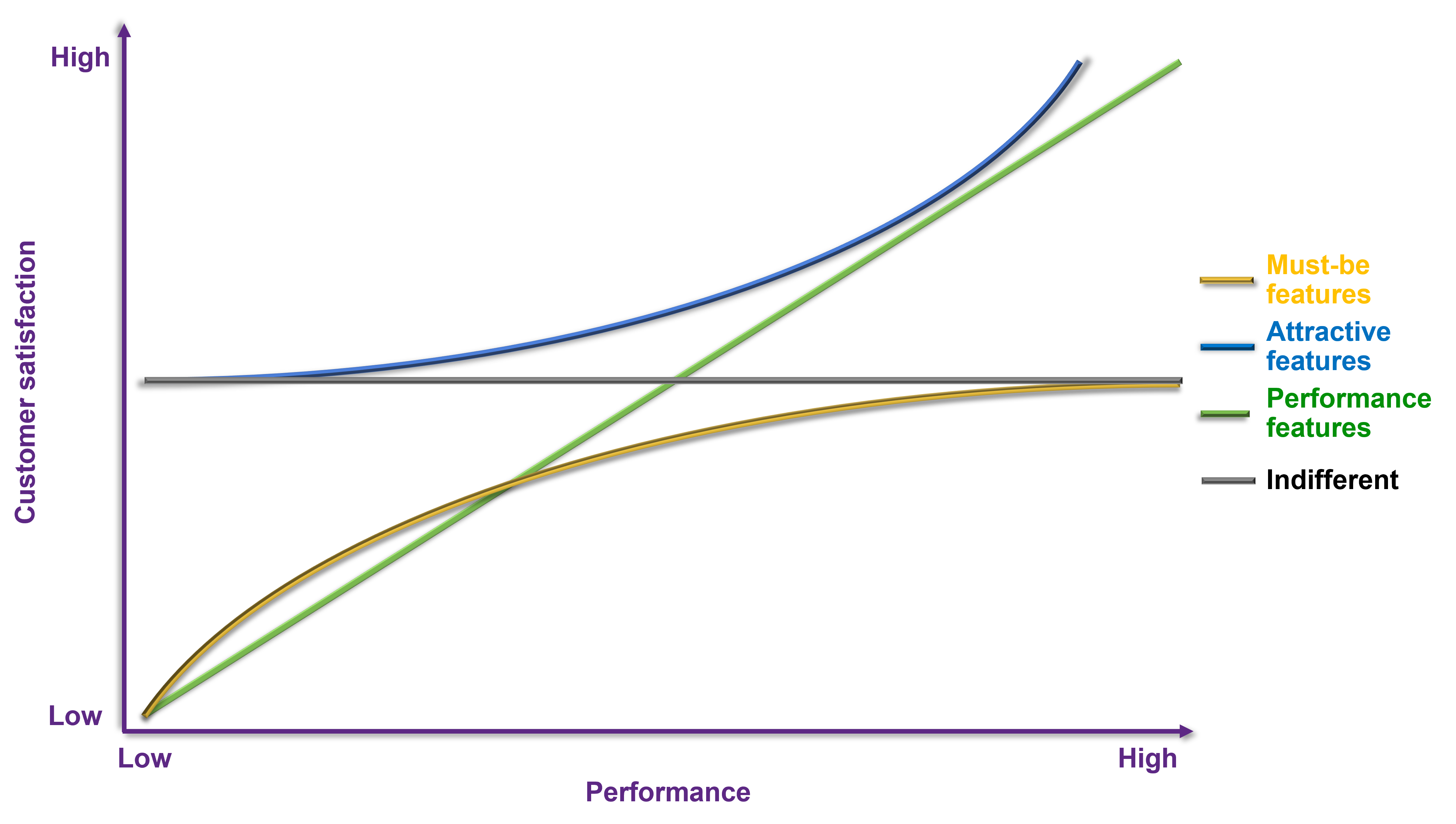 These relationships allow a product feature to be categorised into one of four categories, summarised in the following table:

Each feature is assigned a category according to the following matrix based on the responses.

For example, when a respondent expects Feature 1 to be included, and dislikes when Feature 1 is excluded, Feature 1 is categorised as a must-be feature for the respondent.

Then, Conjoint.ly generates the Feature Categorisation Matrix and Feature Classification Table based on continuous and discrete analysis, respectively.

Want to learn more about the Kano Model? Check out the free template set up with a case study for classifying attributes for a new smartphone.

A Kano Model survey consists of the following stages:

How would you best describe your usage, or intended future use regarding the enterprise software?

No Use or Plans

Please consider the following feature regarding the enterprise software.

How would you feel if the feature was included in Soundwave?

Love it Expect it Indifferent Tolerate it Unhappy
Dysfunctional:

Please consider the following feature regarding the enterprise software.

How would you feel if the feature was not included in Soundwave?

Love it Expect it Indifferent Tolerate it Unhappy

Lastly, the survey ends with additional diagnostic questions, such as gender, location, and current software usage, that help you perform the subgroup analysis for more in-depth insights.

How many people are employed at your company?

Which of the following enterprise software are you using?

None of the above

Take a sample Kano Model survey to experience how the respondents go through the decision-making process. Or book a call to discover your users' needs now!

Looking to perfect your SaaS offering?

Whether you are looking for insights on your user needs, adopting new users, expanding to a new market or reducing churn rate, Conjoint.ly's team of experts are here to provide you with solutions on time and on budget.

KANO
Features and claims
Feature and Pricing Suite for SaaS

Place product features into appropriate tiers according to users' perceived importance and willingness to pay.

Test multiple pricing page designs and validate the pricing page for the maximum conversions and the minimum dropouts, with insights into the attractiveness of CTAs, marketing copy and content, visitors' plan choices, reaction time, preference share, revenue projections and more.