Get started for free

Brand-specific conjoint is a discrete choice method for markets where potential product characteristics vary across brands or SKUs (it is commonly the case in FMCG, telco, home appliances, and tech). Technically known as choice-based alternative-specific/labelled conjoint design, it is used for:

The survey flow consists of approximately 12 questions with different SKUs to choose from.

Brand-Specific Conjoint surveys can be automatically translated to more than 30 languages.

Estimate share of preference based on customers' revealed preferences.

You can run "what-if" scenarios to see how consumers will behave if you change features of your product. Learn more about preference share scenario modelling.

Run "what-if" scenarios to measure the amount of interest in new product ideas, compare with current SKUs and assess sources of business (i.e. if you are sourcing from competitors or cannibalising your product line).

Estimate consumers' sensitivity to price changes and its effect on sales.

Run "what-if" scenarios to assess consumers' reactions to price increases or decreases in the context of your other SKUs and competitor offerings. Project revenue levels at different pricing options to select optimal pricing for your new or existing SKUs.

Conjoint.ly estimates how strongly customers prefer different brands of products, taking into account the different variants (combinations of features and prices) presented to them. In this example. Telco A is the strongest performer, while Telco E lags behind.

Importance of product characteristics and performance of different features.

Conjoint.ly estimates how important each attribute is relative to the other attributes in customers' decision-making process. This is called relative importance of attributes. For example, in this test for Telco A, coverage is approximately three times as important as price (given the range of price levels tested) - 54 points vs. 16 points.

Each level of each attribute is also scored for its performance in customers’ decision-making. This is called relative performance of levels. For example, for Telco A there is clear preference for nationwide coverage over metro areas, and for metro areas over downtown-only coverage. 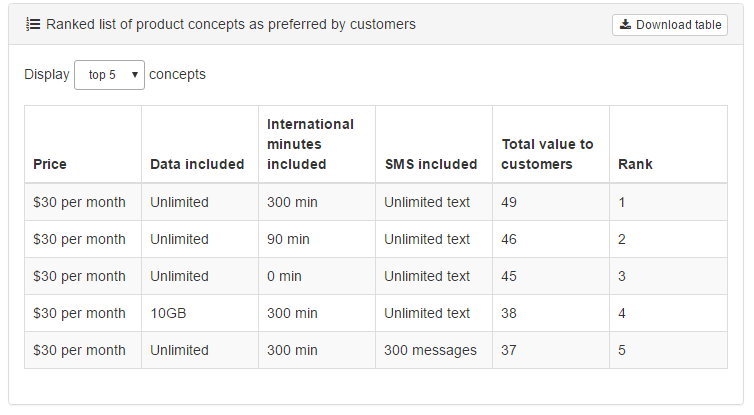 List all possible level combinations and rank them by customers' preference.

Conjoint.ly forms the complete list of product constructs using all possible combinations of levels. They are ranked them based on the relative performance of the levels that they combine. This module allows you to find the best product construct that your customers will prefer over others. 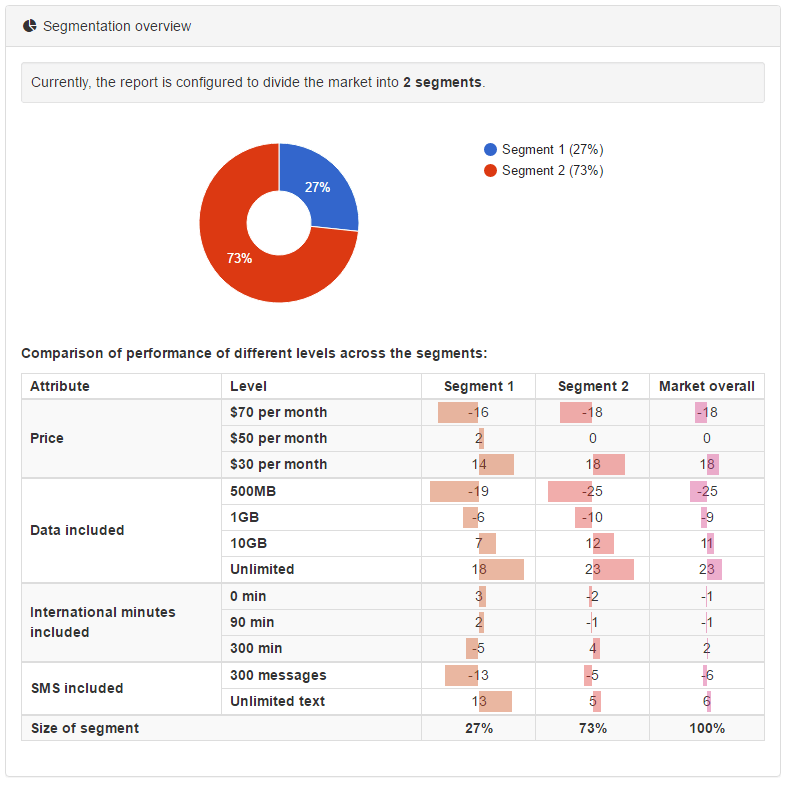 Segmentation of the market

Find out how preferences differ between segments.

With Conjoint.ly, you can split your reports into various segments using the information collected automatically by our system, respondents' answers to additional questions (for example, multiple-choice), or GET variables. For each segment, we provide the same detailed analytics as described above.

What is Conjoint Analysis?

Conjoint analysis is one of the most widely-used and powerful quantitative methods in market research. Discover how it works and where to use it.

MaxDiff analysis for robust ranking of flavours of your product by consumer preference; or usage occasions by frequency.

Allowing advanced choice modellers to upload their own experimental designs and perform data collection on Conjoint.ly.

(I have questions about the tools or my project.)
×